REMOVAL OF OIL IN GROUNDWATER WITH FRIESS OIL SKIMMER

In the area around a refinery’s facilities the groundwater was suspected of being contaminated by hydrocarbons.

Request
send us an inquiry

Test borings in the refinery area confirmed the contamination by waste oil that had percolated through the ground, and that had left a layer of waste oil on the surface of the groundwater. The local authorities engage a consulting company, and asked that they recommend a method for safely removing this oil layer. The consulting company drilled a series of 300 mm diameter test wells, which showed that the current groundwater level was 4 m below ground level. The original groundwater level had been higher than this, but it had gotten lower because of continuous water removal from a well. As

water was being removed from the well, the oil on the groundwater surface flowed towards the well, which mixed with the groundwater. To keep the oil removal costs as low as possible, a fully automatic removal system that could separate the oil layer from the groundwater – and that didn’t require maintenance or supervision – was desired.

A suction system was considered.

This system would extract the oil layer from the groundwater using a suction hose. However, the height that the oil had to be lifted to the ground surface was 4 m. If a large suction hose was lowered in the 300 mm diameter test well, where do you then put the suction pump, and how do you collect the removed oil? The intent was to remove the oil as rapidly as possible to stop further oil build-up and mixing of oil and groundwater, but if the suction is increased, the suction hose end will also pick up large amounts of water as well as the oil. This presents another new problem: how do you separate the removed waste oil from the water that came with it? By decanting the water? For good oil layer removal, the oil layer has to be at least 50 mm thick so that the suction tube removes mainly oil and very little water. However, that thick an oil layer would have also meant more potential mixing of oil and groundwater, and with another device needed to separate the oil from the water, supervision of the process would have been necessary; and the removal costs increased.

A Belt oil skimmer was considered.

Since the test borehole diameter of 300 mm was a limiting factor, a special model belt oil skimmer would have been required to meet the borehole size constrain, as well as the lift height of 4.5 m to move the oil up to the surface. Designing and building a special belt oil skimmer model just for this application would have been very expensive. The belt oil skimmer operation would also require constant monitoring, since the oil being removed is also contaminated by sand and other particles. The belt oil skimmer’s steel wipers would soon be worn out by abrasion and would need frequent replacement; if the oil discharge chute became clogged with the sticky hydrocarbon.

will be removed with the oil, as well. If the floating oil thickness is in the 0.1 mm range, the amount of water removed together with the oil increases. All the oil skimmer parts that contact the oil collector tube are made of ceramics, apart from the lower pulley wheel, so that there is no wear on the drive system components. There are no maintenance requirements for the system to operate. The ceramic oil skimmer components have an operating life of approximately 5 years. The oil pickup tube will require replacement after 1 to 2 years of continuous operation. This is a function of the composition of the collected oil and the quantity of abrasives it contains. The FRIESS Model 2H oil skimmer operation required no monitoring, or supervision. The oil skimmer is equipped with a sensor. If the oil collector tube becomes blocked, or it isn’t moving, an automatic alarm will sound. 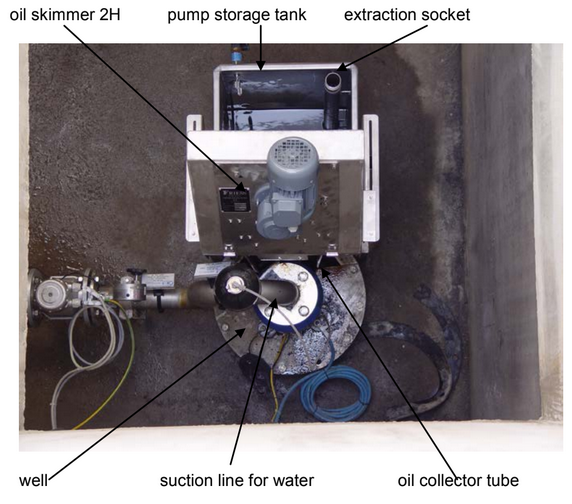 Daily operation of the FRIESS Model 2H oil skimmer at the refinery quickly removed the major quantity of waste oil from the surface of the groundwater. Intermittent operation of the oil skimmer was then needed as the oil film thickness slowly decreased to minimal amounts on the refinery groundwater surface. System operating frequency and scheduling are adjustable from the control panel. Five minutes a week of operating oil skimmer time was then sufficient to remove any floating traces of waste oil that were appearing and that had accumulated during the week.