Defeat contaminants in non-conductive fluids once and for all!

Electrostatic Oil Cleaning Systems from Friess remove particles as small as 0.1 µm and aging phenomena such as varnish and oxidation products. This not only increases the service life and durability of the oil, but simultaniously optimizes machine precision and reduces hydraulic malfunctions.

How does Electrostatic Cleaning work?

Our Oil Cleaning System is connected to the oil tank in a bypass flow. The oil is then transported from the reservoir to the Electrostatic Oil Cleaning System by means of a gear pump. There, electrodes charges with a voltage of 14,000 V ensure that contaminants contained in the oil are attracted and deposited on cleaning elements. The innovative Friess principle removes both hard contaminants such as metal particles, seal abrasion or chips, and soft contaminants such as oxidation products, varnish and sticky sludge particles.

The special feature of this method is that you are not limited by the pore size of your filter elements. Unlike other filters, the field forces of an electrostatic field act on particles of all sizes. As a result, you get a particularly clean oil that is even cleaner than new oil! Thus, you save yourself expensive and time-consuming oil changes.

send us an inquiry 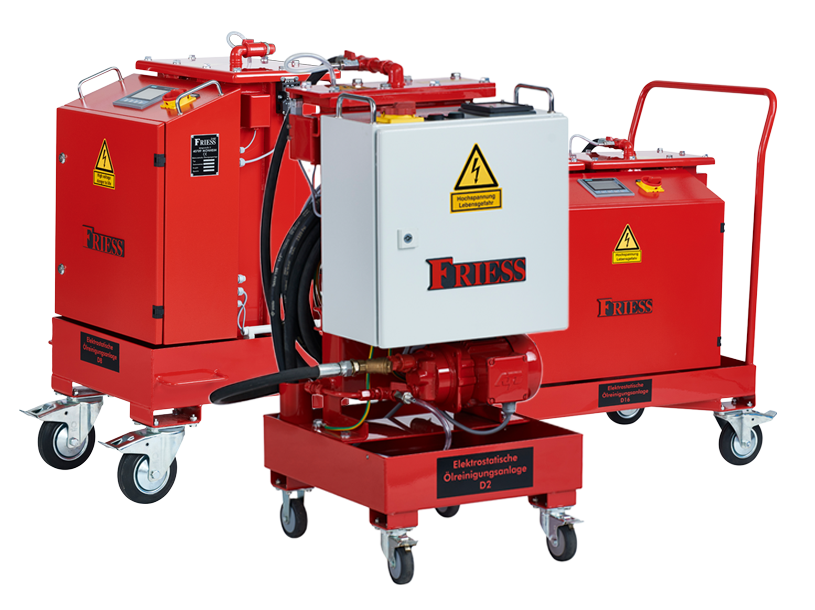 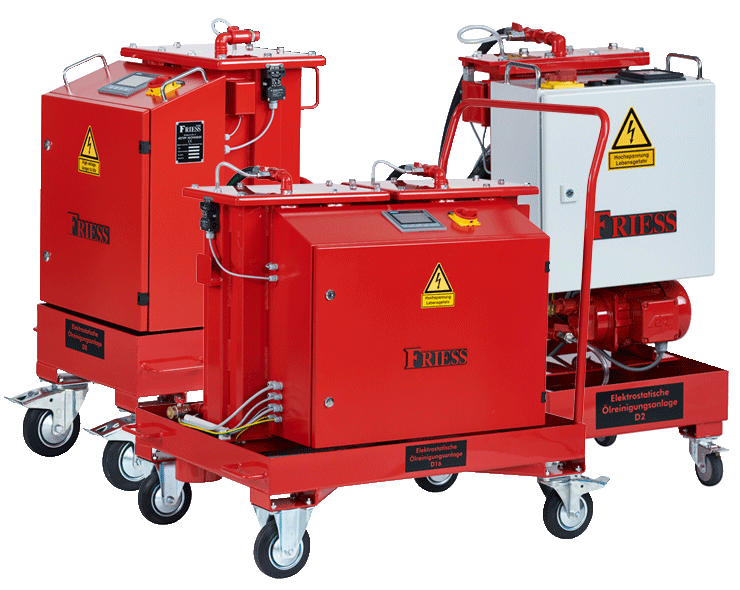 How Pure Oil Protects your Machinery

The lubricating film between the individual components moving against each other is sometimes only 1 – 4 µm thin. If dirt particles are then pressed into this lubrication gap with the hydraulic oil, the particle interrupts the lubrication film. This can damage the surface and create new particles. These new particles generate further particles and the contamination of the oil increases exponentially. During operation, the tip of a gear or vane of a vane pump wears down more and more and the pump’s flow rate decreases. Internal leakage can occur in valves and the control precision of the hydraulic components decreases.

As the oil is pumped through the system at high speed and pressure, the particles contained in the oil hit edges, nozzles, etc. with high energy. This results in the particles damaging the surface on impact and producing new particles. In the long term, erosion leads to reduced control precision and internal leakage. Often, “washed out” piping and components are found in defective valves. Here, particles have steadily eroded material.

Oxidation products, also known as varnish, are aging phenomena of oil. This occurs due to the reaction of the oil with oxygen in the air. The oil is oxidized. Typically, this reaction is quite sluggish and slow. However, particles and contaminants in the oil act as a catalyst for this reaction. Therefore, the more particles are present, the faster the oil reacts with the oxygen.

In the long run, varnish leads to considerable operating difficulties in the hydraulic system, since varnish is no longer a liquid but a solid. This causes valves to stick together and move more slowly. In extreme cases, the Varnish will completely gum up a valve and it will have to be replaced. Because of the particles contained in the Varnish, it is frequently also very abrasive.

Modern hydraulic systems are high-precision systems consisting of pumps, switching and control valves, cylinders or hydraulic motors. The hydraulic oil not only ensures power transmission, but also serves as a lubricant for the moving components. In general, it can be assumed that approx. 80% of all malfunctions in a hydraulic system are due to contamination of the oil.

Foreign substances such as dirt particles, water or varnish cause a wide variety of malfunctions and machine failures. This results in high oil consumption and very high operating costs.

Hydraulic components are already contaminated with dirt particles during assembly. Since pumps and valves are manufactured by machining, a large number of particles are present on the components at the end of assembly despite all efforts and cleaning stages. The hydraulic oil used for a test run of pumps and valves is often heavily contaminated with particles, as often no hydraulic filter or only a very coarse one is used during filling. Dirt from the piping and tubes enters the system during final assembly of the system.

Many users have seen a reduction in costs for repair, maintenance, downtime, oil change and waste oil disposal of up to 80% by using a customized cleaning technology for their hydraulic oil. In addition, many users have been able to significantly reduce the warranty claims of deliveries due to improved machine precision or clean oil in the test bench.

Oil cleaning and oil filtration have the same goal in mind: removing dirt particles from the oil. However, electrostatic oil cleaning systems have a different operating principle than oil filters. With the electrostatic field force, particles are attracted and bound to cleaning elements rather than pumped through a membrane with pores. This allows the oil cleaning system to remove much smaller particles, since it is not limited by a pore size, but the field forces work on all particles. Varnish is also affected by the electrostatic field. On the other hand, an oil purification system works slower than conventional filtration systems.

Nevertheless, both concepts should be used in a hydraulic system. They are not mutually exclusive. Filters should be installed in the inlet and outlet of the hydraulic system to protect the pumps. Filters are also essential when filling a system with new oil to reduce the amount of dirt entering the system. Hydraulic filters are also indispensable for coarse filtration. For the removal of the finest contamination and aging phenomena such as varnish in the oil, in order to be able to use the oil as long as possible, an electrostatic oil cleaning system is indispensable and a hydraulic oil filter is not sufficient.

Areas of Application and Industries that Benefit from Electrostatic Oil Cleaning.

Companies with hydraulic systems such as:

How does an oil cleaning system reduce your oil consumption?

By keeping your oil from aging as quickly and keeping the contamination level as low as possible, your oil will not need to be changed as often. This simply reduces your oil consumption proportionally to the elongation of the changing interval for your hydraulic oil.

How does clean oil help reduce your maintenance costs?

It has been proven that up to 80% of all damage in a hydraulic system is due to contamination of the oil. When the oil is clean, this damage no longer occurs in the same frequency as before. As a result, fewer components need to be changed, there is less oil loss that would occur if components were replaced, and the labor time that would be spent on such a replacement no longer needs to be spent on such tasks and can be used elsewhere.

These factors give you significant potential savings by taking proper care of your oil.

How does continuous oil cleaning affect your costs?

Continuous cleaning of your oil gives you clean oil in the long term. Provided the oil does not change chemically, it can continue to be used in a clean condition for a long time, with only leakages having to be topped up. This can delay costly oil changes and postpone the next delivery of hydraulic oil.

Clean oil also helps reduce damage to valves and other components, which in turn avoids downtime.

Damage, oil costs and downtime account for a large portion of the cost of operating a hydraulic system. With a significant reduction in these costs, hydraulic systems can be operated far more profitably as they no longer incur so many costs.

Varnish, also known as oxidation products, is the aging phenomenon of oil. This occurs due to the reaction of the oil with the oxygen in the air. The oil is oxidized. Particles and contaminants in the oil act as a catalyst for this reaction. Thus, the more particles present, the faster the oil reacts.

In the long run, the varnish leads to considerable operating difficulties because it is no longer a liquid but a solid. This leads to sticking of valves, which move more slowly. In extreme cases, the Varnish will completely gum up a valve and it will have to be replaced. Because of particles contained in the Varnish, it is also often very abrasive, which damages the hydraulics.

Although Varnish is a solid, it is usually soft. As a result, a hydraulic filter cannot remove it by filtration because it forces its way through the pores. Or it can gum up the pores of a hydraulic oil filter, leading to premature filter replacement.

What makes cleaning your process fluids with equipment from FRIESS so special?

Our oil cleaners clean oil particularly thoroughly. Unlike a filter, our equipment is not limited by a pore size, but the electrostatic field works on all particles, regardless of how large or small they are. Furthermore, soft particles such as oxidation products or so-called varnish (signs of aging in the oil) can be removed, which most hydraulic filters cannot do.

Although our systems work comparatively slowly, they can keep your oil cleaner than the new oil you receive!

What is the Return on Investment of an oil cleaning system?

The ROI of a Friess electrostatic oil cleaning system depends on various parameters:

Depending on the amount of oil and the price per liter, an oil cleaning system can pay for itself within 2-3 months if one oil fill is saved and thus no longer needs to be changed.

In most cases, an oil purification system will have paid for itself within a year. This is due to the savings in oil purchase and disposal, as well as the reduced failure frequency of components in the system.

When hydraulic oil reaches a certain level of contamination, it must either be replaced or cleaned. Depending on the amount of oil and the type of oil, an oil change can be a very costly undertaking. However, it can often be worthwhile to simply clean the oil instead of changing it. This not only saves costs, but also improves the environmental footprint, since less oil is consumed.

Basically, we recommend that as long as the oil and your system are not too dirty and the oil still meets the necessary chemical requirements, it is worth cleaning the oil.

How long does it take for oil to be clean again?

This depends on many factors, first and foremost on the current contamination level in the system and the filtration used so far. The dirtier the system and the oil, the longer it takes to get it clean. However, once the system is clean, keeping it clean does not require as much effort and time.

However, since every system is different, we cannot make a generalized statement without any data. We would be happy to help you make a more accurate determination.